skip to main | skip to sidebar

We frequently hear critics argue that U.S. students can’t write well and that there is a “literacy crisis” in the U.S. What is the origin of these discourses? What do they have to do with immigration, national security, and economics? How does the notion that Americans can’t write drive the national push to test writing? Here we explore the history of writing and testing in the U.S., the “science” and technology of testing approaches, and how the rhetoric of assessment impacts the lives of Americans today. 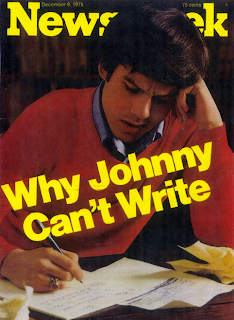 In 1975 Newsweek published the article “Why Johnny Can’t Write,” claiming that the U.S.  educational system was spawning “a generation of semiliterates.” As evidence of the dire quality of student writing, Newsweek author Merill Sheils presented four examples of student writing. What strikes me about those samples is that the errors offered as evidence are accessible to a general audience—misspelled words, misplaced prepositional phrases, and convoluted prose. They are all errors that readers can “get.” The assumption is that educated writers would not make errors in their writing. Yet, grammar, punctuation, and usage errors can be found in many pieces of writing. It’s just that some errors matter more than others if we are to provide evidence of a literacy crisis in the U.S. I doubt errors in semi-colon usage would get readers as interested as the samples provided by Sheils.
Another fascinating aspect of the “Why Johnny Can’t Write” article is the visual imagery. On the cover is Johnny—white, middle class, and on his way to college. He obviously represents the establishment, but the images included with the article show quite different faces.  Here, for example, we find images of white children watching TV and attentive African American high school students with their white, female teachers.  We never see Johnny in the classroom. Why do we never learn the fate of Johnny?
For a useful analysis of the "Why Johnny Can't Write" article, see the National Conversation on Writing video: http://www.youtube.com/watch?v=ykOtgK2sKy0
Posted by Mya Poe at 8:31 PM

I always assumed that all college students can write. If they can’t express themselves on paper, then they aren’t “college-material.” I have to admit that I was a little skeptical about the “literacy crisis” that is supposedly plaguing our students across the nation as discussed in the article, “Why Johnny can’t write.” Therefore, I read the article very critically and didn’t give it much more thought afterward; after all, it was published 36 years ago. How can it possibly still be relevant?

Yesterday, I was sitting in my CI 280 (curriculum and instruction) class, and my teacher posted some of my classmate’s writings on her power point slides. She selected “good” samples from our reading responses and said to model our own responses after them. Unfortunately, I couldn’t focus at all on the content of these samples and instead was flabbergasted at the amount of writing mistakes my classmates had made. All of a sudden, “Johnny” popped back into my head. Almost every response contained run-on sentences, awkward wording, or grammatical errors. I began thinking that perhaps there is some kind of “literacy crisis” going on.

The article was written well before spell-check was invented. I could see how the students of that era could have typos or errors in their writing. But for my generation, we have it easy. We don’t even need to know how to spell: Microsoft Word instantly corrects most errors in our work. So what excuse do we have? Is it the teachers we’ve had in the past who are to blame? If that is so, the class I was in was full of our future teachers. If the future teachers of American cannot write, how can we expect them to teach our children to write?

I am worried about the future…Will the literacy crisis of today turn into a literacy emergency tomorrow?